A new addition to  the social media family – Toeter . Speakers of Afrikaans can finally share their thoughts online in their native language! 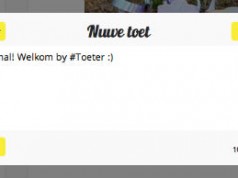 Have you always wanted to use Afrikaans to do your social media business in? The wait is over! Media Online gives account of the launch of Toeter, a social networking site in the Afrikaans language. To find out more about the website, the Media Online interviewed Toeter’s founder Frans Roelofse.

Even though the Media Online thinks Toeter looks a lot like a bright yellow version of Twitter, Roelofse says the website isn’t simply a Afrikaans equivalent of the social media platform.

According to him, Toeter has not only been developed to target a specific market, it also presents new ways of advertising and has an unique coding. Roelofse says Toeter and Twitter are the similar as two cars from different brands: many functionalities are the same, but the two are actually very different.

Roelofse started his research on building the social media platform three years ago, and this May, the website finally went live. The coding was created by the South African company Techsys and according to Roelofse, this coding is very different from the one Twitter uses. The idea of a social network in Afrikaans came to Roelofse when he realised how many children listened to music in the language. He believes there is a market for local social media, the Media Online states. Users join certain online “tribes,”  a phenomenon called “digital tribalism,” which has led to the splintering of social networks.

According to the Media Online, it is very easy to register at Toeter. Moreover, they say, the website has some cool extras such as a breaking news feature called “bliksem” and “magnets” that users can follow. There are about five different ways in which advertisers can display their products on the website as well. Toeter’s main shareholder is Roelofse himself and the platform is not affiliated with a media group.

Roelofse wants to make clear that Toeter has not been created to become a podium for right-wing Afrikaners. Racism will not be approved, which is why comments are monitored and can be removed from the website. Roelofse states that his social media platform wished to target the new generation that has an open mind and is a way for Afrikaners to talk to each other “in the language of their heart.”