Enterprises that are planning to expand their activities to the African continent should take a closer look at their enterprise resource planning: ensuring that their ERP system approaches consumers in their own language can positively influence their success. 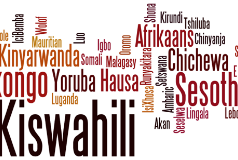 According to Taryn Cromie, many companies that wish to expand their business turn their eyes to Africa. If a company decides to focus on Africa, she says in her article on Ventureburn, its enterprise resource planning is put to a multitude of tests.

Businesses have to be able to deal with different currencies, time zones and bad connectivity, for example. However, Cromie believes the most important test has to do with language. After all, she says, enterprise resource planning systems that appeal to African consumers in the language of their choice are more popular than systems in a language that they do not speak.

Cromie believes that a company’s enterprise system is easy to understand, this has a positive effect on user acceptance. If an enterprise expands its activities to an African country such as Angola or Mozambique, she says, new employees have to work with the existing system. As the newly attracted staff would prefer Portuguese of French to operate the system in and might have problems with this in English, systems that provide multilingual support have an advantage over those that don’t , Cromie says.

Not only companies based on other continents have to deal with new languages when expanding to new African territories. According to Cromie, South African companies, for example, also benefit from looking beyond an “English-only” system. In addition, she points out that South African enterprises have to be aware that the internet connection in other African countries might not be as good as the ones they are used to. This can give rise to problems for a lot of legacy software systems, she says, as these need a certain level of underlying infrastructure. Thus, companies need to ask themselves whether they can still trade if the infrastructure leaves a lot to be desired.

Cromie believes the solution for conducting business with countries that have bad internet connections lies in creating systems that can work offline or with minimum bandwidth. After all, she says, even though the infrastructure in many countries is improving, it is often still bothered by problems such as the theft of copper internet cables. Thus, she believes a companies must make sure their systems function on mobile internet as well.

Next to wavering internet connections, Cromie believes ERP systems must also  be adapted for developing nations in other ways. For example, many systems only work if addresses are entered in a specific structure (street number, name, postcode), but developing countries often do not use this structure. According to Cromie, creating a system for African countries could mean that companies have to do some creative thinking.

Cromie concludes by saying that the ERP system of enterprises that want to expand to Africa has to work on smart mobile devices that enable employees to work wherever. Moreover, the system should also be able to communicate in older technologies, for example SMS, as smartphones are not very widespread on the African continent.

Cromie believes ERP systems should be able to function without an internet connection, which is especially true for Point of Sale environments of retail companies. At the very least, she says, companies should incorporate mobile internet and Africa’s lingua franca’s in their system.