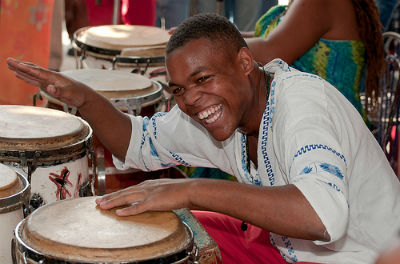 Music and Language Learning in Zambia

Did you know that incorporating music into language learning is not only a fun way to learn a new language, but a very effective one as well? 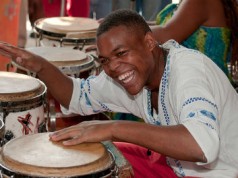 In his column on AllAfrica, Clever Zulu informs us about how music can be used in language learning. In Zambia, the subject of local language learning has recently gained a renewed interest when the Zambian Ministry of Education decided that young children should be taught the local languages of their region at school.

This addition to the school curriculums seems like a good idea, as it will help local languages from becoming extinct. According to Zulu, this measure has been met with opposition though, because critics believe it will disadvantage children on the international field. However, Zulu seizes the opportunity to bring the connection between music and language learning into the limelight.

Zulu says that the Zambian people sometimes stereotype others because they listen to a certain type of music. Moreover, he believes musical preferences can even influence someone’s vocabulary! Here, he gives the example of Rhumba music: manyZambians are now familiar with Lingala and Swahili as songs of this type usually come from the Democratic Republic of Congo in which these languages are spoken.  Zulu thinks that the fact that language learning can occur via music means that music cannot only change a language, but can work as a language preserver as well.

According to Zulu, in the past, many people, ranging from teachers to philosophers, have seen the importance of music in healing and developmental functions. He refers to a book called The Use of Music for Learning Languages: A Review of the Literature, that states that the relationship between language and music has been known for a very long time. Both have key elements such as melodic recognition, rhythm and perception of sight and sound, to name a few.

Music has a positive influence on language accent and grammar, Zulu says. Moreover, it also impacts enjoyment, mood and motivation. As he believes musical mediums are a great way to communicate in, he believes language teachers and music therapists should support the conjoined study of these disciplines.

Zulu reveals that a study from the University of Illinois has shown that music stimulates memory. He believes this outcome isn’t surprising: after all, aren’t kids taught many things in songs or rhymes? Moreover, lyrics, whether you sing or learn them, also have a positive effect on vocabulary: lyrics often involve words or word combinations the singer is unfamiliar with. By singing or learning them, a person thus expands his vocabulary, Zulu says.

Next to affecting memory and vocabulary, Zulu says, songs also improve the pronunciation of the speaker. According to Zulu, singing makes accents less prominent as words are easier to articulate when they are sung. It is also boosts your comprehension skills, Zulu says. According to a Cognitive Daily article written by Dave Munger, learning  a new language starts by figuring out where one word ends and another begins. Zulu believes that this initial step is also the most difficult feature of learning a language and is made easier with the addition of music.

Music also enriches language with pitch and melody, which makes it easier to distinguish separate words. However, Zulu says, the most important reason why music and language learning should go hand in hand is because music is fun. He believes music can help you regard tasks as effortless as it improves morale and motivation.

Zulu’s column certainly shows that language and music are great partners in crime. Zulu believes that musicians and singers in Zambia can help to promote the local languages in the country if they write or sing songs in their mother tongue. This way, the decline of local languages will be put to a halt. According to Zulu, whatever the language, good songs will touch a nerve in people, who will then educate themselves about the language of the song because they want to know the meaning.