Is Yoruba becoming a global language?

OK Yoruba might not yet be a “global” language such as the likes of English, Spanish or Chinese, but an academic in the USA has (rightfully in our opinion) stated that it is definitely becoming more important. 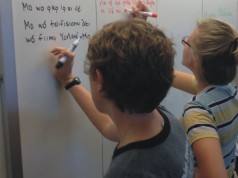 Dr. Akinloye Ojo, Associate Professor of Comparative Literature at the University of Georgia, Atlanta, USA, in a recent lecture stated that Yoruba and Hausa languages are gaining increasing recognition in the areas of teaching and learning in many American and European universities.

As well as abroad he informed his audience that the Yoruba language was taking on greater socio-linguistic and socio-cultural functions at home, i.e. in and around Nigeria.

As a result he is calling on the Nigerian government to properly define and implement an indigenous language policy to further give Nigerian local languages more global recognition.

“Yoruba is acquiring new speakers at various proficiency levels at an all-time high across the world.”

Although one of the most rapidly growing languages used in the USA, the academic exposed how many cases in the courts of the USA are being delayed in courts for several months, even in some cases, years, as there are no translators for the language.

Ojo, also Director of African Studies Institute at the University of Georgia, explained that the US government is investing in the study of African languages, such as Yoruba, Swahili and Hausa, and has established national resource centres across the country due to its growing interest in the continent.

His lecture echos much of the discourse we have been following and sharing on our blog about the growing importance of Africa’s indigenous languages. As the continent becomes more important globally for business and trade, the more finance flows in. The more finance that flows in leads to growing wealth and with wealth comes a desire to express ones culture, including language. It will be fascinating to see which of the languages gains more importance…Yoruba? Swahili? Amharic? Something else?

Read more about his lecture: “Pedagogy of Yoruba Language in the United States of America: Retrospect, Prospects and Lessons for Nigeria.”