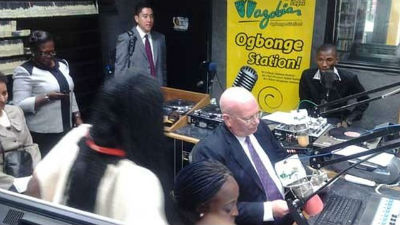 Last week, the American ambassador in Nigeria had an interview on Nigerian radio. This interview was quite remarkable, and not because of what the ambassador said, but because of how he said it – he spoke in Pidgin English! 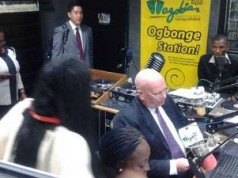 According to Ofeibea Quist-Artcon on website NPR, the American ambassador located in Nigeria, James F. Entwistle, has recently generated a lot of interest. When he was interviewed for Wazobia FM, a Nigerian radio station that broadcasts in Pidgin English, Entwistle surprised everyone when he answered the interviewer in Pidgin.

Pidgin is a lingua franca that is spoken in West Africa, Quist-Artcon says. According to her, the language, that is also known as broken English, eases communication between the Nigerian people, that have hundreds of different mother tongues. When Entwistle was asked about the new anti-gay legislation in Nigeria and possible sanctions from the US, he answered in Pidgin English and stated that the US is not planning on imposing sanctions on the country by saying “The U.S. government no say sanction go dey for Nigeria, because of same-sex palava-o.”

Quist-Artcon points out that it is very uncommon for Westerners to learn the Pidgin language. This is why the request from the ambassador to conduct the interview in Pidgin came as a surprise to coordinating manager of Wazobia FM, Onimisi “OJ” Adaba. Adaba didn’t even knew the ambassador spoke the language! Host of the radio show, Omotunde “Lolo” David, was very pleased with the fact that Entwistle decided to use Pidgin to answer his questions. David is a big fan of the language and says that even though it might not be the language used in diplomacy, the Pidgin language ensures far more people are reached.

David describes Pidgin as “inventive, humorous, clever and curious” and believes the language is as colourful and expressive as the Nigerian culture. He even states that Pidgin has regional variations and is an ever-evolving language. David says it was a wise move of Entwistle to be interviewed in Pidgin: this is a way, the Nigerian people get a better understanding of the United States.

Entwistle himself agrees with this, Quist-Artcon says: according to him, diplomats must keep in mind that they must get out of their offices and get to know the citizens of the country they are in. The ambassador was asked a range of questions, for example about the Nigerian elections that will be held next year. As the reigning party of President Goodluck Jonathan is expected to be defeated by the opposition, David asked Entwistle which party he favoured. As a true politician, he answered that he doesn’t mind who wins, as long as the elections are held in a transparent manner.

Both David and Adaba were impressed with Entwistle’s efforts to speak English. Quist-Arcon states that the two men believe that after the interview, many Nigerians have embraced the ambassador, which is very favourable for the American Embassy.