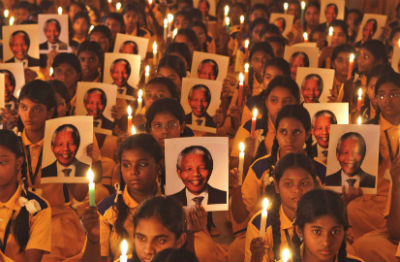 After an absence of twenty years, Indian languages make their comeback on South African Schools!

In previous years, South African schools taught Indian languages such as Hindi and Tamil as part of their official curriculum. This practice ended twenty years ago, but according to an article on the Business Standard, these languages will soon return to South African classrooms after pleas by the Indian community in the country, which consists of 1.4 million people.

The Business Standard states that the Indian languages will first be offered to pupils in the KwaZulu-Natal province, which houses about 70 per cent of all South Africa-based Indians. First, the languages will merely be an optional third language. The news was confirmed by the head of the Education Department in the Province, Nkosinathi Sishi. In addition to the Indian languages, pupils can also opt for Arabic.

According to the article, there already are a number of South African schools that offer classes in Indian languages, but these are not part of the official, approved curriculum. This situation is about to change and the South African children will have access to Indian language learning up to their final year in school. However, the Business Standard does point out that classes will only be offered if enough pupils are interested as schools have to hire teachers specialised in the languages.

Someone who is very happy with these recent developments is Ram Maharaj, the hairman of the National Council for Eastern Languages. He has made pleas for Indian languages classes since 2001 in hopes of preserving the mother tongue of the Indian population in South Africa. He is glad that the government has finally granted his wish. Even though he hopes that in the future, all school children in South Africa will have access to Indian language classes, he thinks the current plans are a great starting point. Maharaj also calls on parents to encourage their kids to take lessons in the Indian languages.